[Originally posted under the title, "MWHITF: Meeting 5 - The View from Near Space."

Mayor Clark opened the fifth meeting of the MWHI Task Force with a description of a "100,000 foot view of where we've been":


In February [2016] we convened this Task Force with the idea that bringing people together in various areas of expertise and various areas of knowledge of need, we could better understand the need and could put together a network that would better meet those needs in a very practical way.  So, we've been going over the background and scope of the problem, understanding best practices that have been put in place in other areas, such as Housing First.  We've looked at the Continuum of Care.  We've had different panels that have brought us some very, very valuable information about our housing and how to put together our strategic framework.  [We've had] a very moving and deeply practical panel of veterans, we had a great panel on mental illness, disabilities, and law enforcement - the interface, again, working together to make sure law enforcement is part of the solution, part of that network in the Continuum of Care, getting people where they need to be to be successful in the long run.


The main event was a series of questions to a panel of "rental managers", consisting of Task Force member Kathleen Ashley (also secretary of the Salem Rental Housing Association and owner of Making Homes Happen, Inc.);  Cathie Miles of Shelter Management, Inc., Nicole Utz of the Salem Housing Authority, and Valerie White, of Encompass Management and Consulting, Inc..

The questions were unsophisticated (e.g., why don't people pay rent?) and responses mostly patient, except after someone asked about "slumlords whose tenants end up needing additional assistance for health, heating, or other needs, [and] drain our [social services] resources."  Our favorite exchange was when one of the panelists said she had commercial office space that could be converted to residential use, except that government regulations requiring sprinklers made it too expensive, prompting Commissioner Carlson to ask, "Sprinklers like a lawn?"

The panelists were asked to opine on tenant abuses relating to service and companion animals, the need for "no cause evictions" and whether housing was safe, sanitary and habitable just because the City said it was.  Unfortunately, time ran out before they could discuss would-be tenants with criminal histories.  (See HUD's recent guidance disfavoring the use of criminal background as an automatic disqualifier.)

Following the panel, thirty painful minutes were spent trying to hear Afshin Khosravi (on the phone from California) demo his Network of Care (NoC) site.  Khosravi is CEO of Trilogy Integrated Resources, a California company that has created hundreds of government websites (what it calls "networks of care").  We couldn't follow the presentation, even though we were sitting in the front row.  A lot of people left during the demo, but even those who stayed didn't seem all that impressed, especially after neither Commissioner Carlson, nor Mr. Khosravi, could recall the price they'd agreed on.  (We found out later it was $30K to set up one page, and $30K per page per year thereafter.)

The demo was Commissioner Carlson's idea.  Apparently, she really does not like 211 Info because she could not "get it to work" and because it requires providers to keep their information current, which apparently they don't like to do.  (In July 2017, Marion County revived its Community Resource Network (CRN), and, in September 2018, Northwest Human Services launched a web-based version of its Crisis and Information Hotline, called Mid Valley Resources (MVR).)

The Task Force did not hear Walter Reed, owner of Healthcare Business Education, Inc., who, according to the first version of the agenda, had been scheduled to talk about "GOODS Services" (GOODS stands for Greater Oregon Online Data Services), a "Human Services and Public Safety Resource Database" used by DHS and Marion County.  Mr. Reed has been to several, if not all, meetings of the Task Force.

Following the Khosravi demo came oral updates from the committees.  The Focus Groups/Coalition committee has met three times, Affordable Housing and Vets have met twice, and none of the rest have met more than once (not counting the independent Health and Housing committee).

The Task Force returns in two months (summer break).  Bruce Bailey has stopped attending meetings, and Mayor Peterson and Councilor Bednarz will be out of office by the end of the year.  Commissioner Carlson has made clear she expects each committee to return in September with at least two recommendations, followed by another five to ten in October, each of which will have to be "explained", considered and voted on individually during the November and December meetings.  This, she predicts, will "take a lot of time."

The regular meeting of the CanDo Board of Directors was called to order at 6:00 p.m. on Tuesday, July 19, 2016, at the First Christian Church at 685 Marion Street NE, Salem. Bruce Hoffman was in the chair and Sarah Owens acted as Secretary.

The minutes of the June meeting were approved unanimously.

Officer DeMarco, filling in for Officer Hill, reported that things had been quiet downtown and that the Department was ready for another National Night Out.

Councilor Bennett reported that the City had posted warnings not to eat fish caught in the Willamette slough due to dioxin contamination and that the Council had been busier than usual this summer.  He noted that among other items on the agenda for the next meeting  there would be a public hearing on a proposed solid waste collection service rate rise of $7.20/month per household and on proposed amendments to the Salem Revised Code to allow the commercial growing of recreational marijuana as a conditional use in the Industrial Commercial (IC) and the Industrial Park (IP) zones.  See here for additional agenda items.  He noted in passing that he did not favor allowing retail marijuana sales downtown, but was interested in hearing from those who might disagree.  He said the City was “close getting a plaza” downtown, and would provide more detail when he could.

In public comment Bruce Hoffman reported that he had organized a National Night Out event with the folks at South Block Apartments and handed out flyers.  Parker Robertson, the manager of the project at 205 Church Street (drive-thru Starbucks) shared the current plan for the drive-thru and promised to return when he had the traffic study results, which had been delayed. 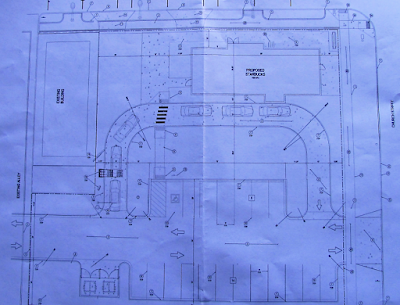 The board then heard a presentation from Sheri Stuart about Oregon Main Street (see here).  Communities wishing to participate in the program need to do so through a legal entity.  Previously, there was some effort by Go Downtown Salem and Salem Downtown Partnership to fill this role, but they were not able to see it through.  Ms. Stuart had met with the newest group, still in the process of forming a legal entity, adopting bylaws, appointing a board, etc., and she believes they are well positioned for success.  She said CANDO would probably want to have at least an ex-officio presence on the board.  Michael Livingston, who has been meeting with the group, said he hoped to bring an action item to the CANDO board at its September meeting.

There being no other business before the board, the meeting of the Board of Directors adjourned at 7:11 p.m. 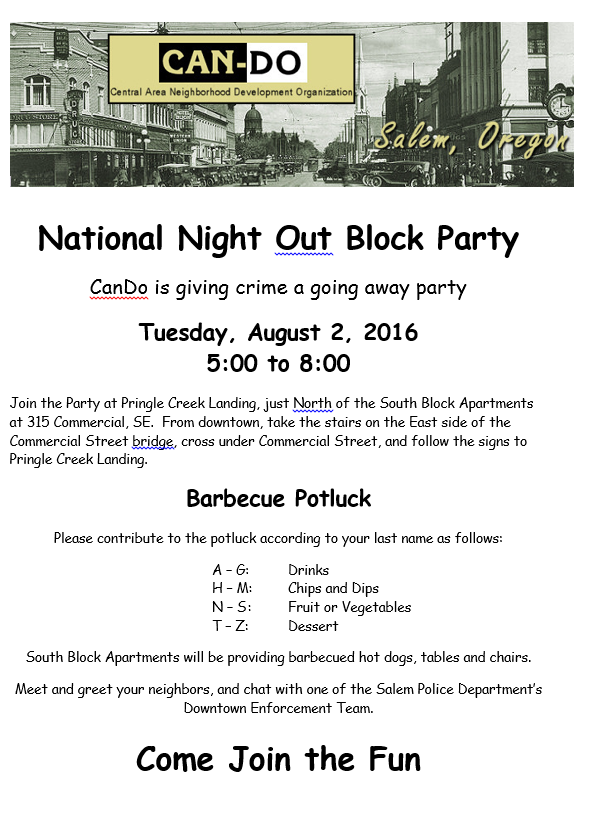 Earlier this month, the Salem Housing Authority announced that it no longer could accept nominations for its homeless Housing Choice Voucher lottery, on account of rising rents and not wanting to run out of money before the end of the year.

Last week, authorities conducted another homeless camp pre-cleanup outreach, this one in the woods behind the Mill Creek Best Western.

No service providers showed up, so it was just us, State Police Officer Davie (the camp was on State property), and the DAS project manager.

The only person present in the area was Nikolai.  We talked to him, trying to to mirror the approach we'd seen Salem Housing Authority staff -- Nicole and Sonya -- use, except we hadn't brought any water or coffee with us.

Nikolai had a slavic accent.  He was clean-shaven and slightly built.  He said his green card had expired.  Yes, he'd been to UGM, but "people drink and stuff", and, anyway, he preferred to be alone.  He was not interested in services, except he'd been to "the food bank" a few times. He'd seen the posted notice and had already moved some of his stuff.  Sgt. Davie ran a wants-and-warrants search and confirmed Nikolai understood he couldn't be there on Monday, and we made our way back to the parking lot.

The MWHITF committees have gotten off to a slow start.  Support Services/Education (Wessel) has scheduled a bunch of meetings (yet to take place), Transitional Housing/Shelter (Starr), Financial (Peterson) and Public Safety (Leinassar) have each met once, Affordable Housing (Bednarz) and Vets (Bobb/Wheeler) have each met twice, and what we think of as the outreach committee (Reeves) has met three times.  (The Health and Housing Committee, so called, is an outside group of health and housing providers who've agreed to "advise" the Task Force at some point.)

The City Council is reporting "progress" on its metrics-free, homelessness-related, "goals."


Recently, the Salem Housing Authority was approved to participate in a HUD demonstration program that will extend rental subsidies for youth from 18 months to the standard 5 years available to families (Resolution 2187, adopted 6/6/16).  It's also been approved to apply to OHA for funding to create a two-year regional healthcare program (including SHA, Marion County Housing Authority, and West Valley Housing Authority) that will provide HA tenants with the services of three or four "healthcare navigators" (aka "community health workers").


Many now recognize that providing good health care has to go beyond the doctor’s office — especially for minorities and low-income people. Limited access to healthy food, environmental perils, crime, insecure housing, insufficient recreational opportunities and the absence of affordable transportation all can have a huge effect on a person’s health.

These factors, often called the social determinants of health, are hard for clinicians to address during medical appointments. To contend with them, hospitals, community health clinics, public health agencies and some health plans are increasingly turning to community health workers.