The Mid Willamette Valley Community Action Agency (MWVCAA) is saying the legislature has allocated $150K toward building out the sobering center in their building at 615 Commercial Street NE, "with a promise secured for another $250K."  See here at page 12.

Last January, the Oregon Housing Department (OHCS) approved the use of a total of $495,856 in State Homeless Assistance Program (SHAP ) and Emergency Housing Assistance (EHA) Phase I, II and III funds for renovations.  With the $487,000 used for the down payment, that's a total of $982,856 in state housing funds that MWVCAA plans to put toward its new building, with zero people housed.

In addition, MWVCAA received $300,000 for renovations from the City of Salem's Community Development Block Grant.

And, just last week, MWVCAA's Community Resources Program Director Jimmy Jones stated publicly (audio here at about 1:15), that MWVCAA has asked OHCS to approve the use of another $250,000 in EHA Phase III funds to make the balloon payment due in 2018.  That would bring the total SHAP and EHA funds going toward brick and mortar to $1,232,856.  (OHCS does not permit the use of EHA funds for debt service.) (See letter from OHCS, below).

Jones told OHCS last summer the renovations would cost "less than $100K", and be complete by November 2017.

The "good" news is that a permit to begin Phase I has been pulled.  The bad news is that MWVCAA doesn't yet have a contractor.  Nevertheless, Jones is now saying the "shell" should be complete by May 1, 2018, which will (finally) allow people come in from the weather.

Phase I will not include the installation of laundry, showers, kitchen or sprinklers that the City requires.  That, Jones says, will come in Phase II, for which they plan to pull the permit July 1, 2018, with the certificate of occupancy expected some time in January 2019.

The plan for Phase III is uncertain.  It might involve office space, or  "respite beds" or the sobering center, probably depending on whether the City and Marion County can persuade Salem Health to up the ante to cover the cost of ongoing sobering center operations, which seems doubtful, based on what we've been hearing.

The City and County still need to come up with commitments to cover the anticipated annual operating costs, which the City says will be between $600K to $700K.  The sobering center project is popular with the Marion County Sheriff's Department and the Mayor, and has the support of the Salem City Council.  What's not clear is what makes a sobering station the best use of the considerable resources it will require, especially as no return on investment's been identified. 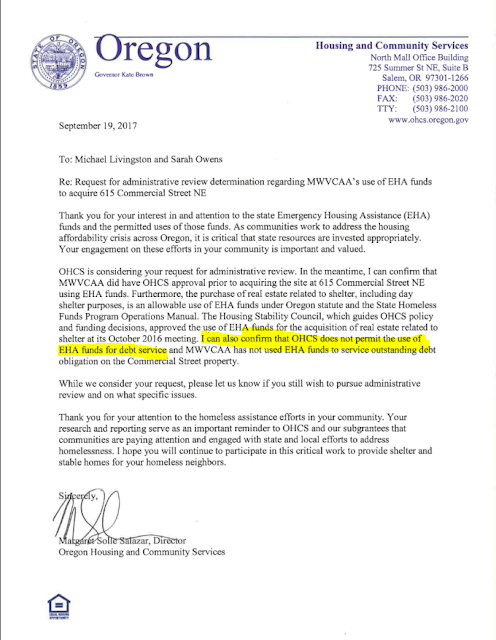 Even if the renovations do not  ultimately include a sobering station, there is still a great deal of public money going into this project, and without much to show for it.  The community was promised a day shelter would be open as of June 20, 2017, but that didn't happen.  So, to make that happen, government agencies are sinking more money into it.  But what about debt service?  The purchase was seller financed.  MWVCAA hasn't articulated a viable plan for servicing the debt.  What if MWVCAA defaults on the mortgage?  If MWVCAA were to default (not be able to make, say, one of the balloon payments), the seller could foreclose, and leave MWVCAA out in the cold, where they've left their homeless clients since last June. And all those public funds invested in renovations?  They would inure to the benefit of the seller.
No comments:

In October 2017, the Mid Willamette Community Action Agency (MWVCAA) said they were going back to Plan A for an overnight warming shelter/center, namely relying on the same downtown churches, specifically the First Christian, Congregational and Presbyterian to host, using the same "prevent-death" guidelines.

But by December, the community was in a bit of an uproar.  See "The Perennial Overnight Warming Shelter Problem." Sorry, MWVCAA seemed to say, that's the best we can do.

Then, on Monday, February 12, MWVCAA announced they would be opening an emergency warming shelter in the new ARCHES building, based on the forecast of an overnight low in the 20s.

Just like that:  no requirement of 32 volunteers, no emergency declaration from the City, no 3 consecutive days below 27.

Turns out, as everyone suspected, none of that stuff was really necessary.  They could just "do it."  Goodbye guidelines. 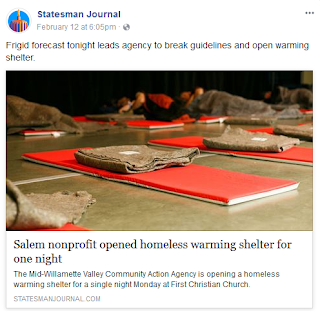 There were 27 at the emergency shelter, which got moved to First Christian Church shortly after MWVCAA announced the decision to open one at ARCHES.

There wasn't even a frantic call for volunteers.

"We are good on volunteers", CRP Director Jimmy Jones posted to FB in response to offers of help, "We are using mostly my staff." As if by magic, there was no more perennial problem. 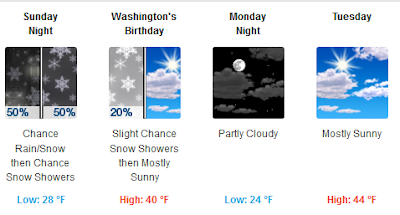 First they said it would be at ARCHES, but the venue was quickly switched to First Congregational Church (two nights), then to the First Christian Church's Morgan Building (third night).

They asked for experienced/trained volunteers, about 10 per shift, and got about 7 per shift, according to the sign up sheet.

Altogether this season, there were ten shelter nights in three locations downtown:  First Christian, First Congregational and First Presbyterian, with an average of 76 guests per night.  See here at page 40.

The Oregon Community Foundation recently gave MWVCAA $7,000 to support the overnight warming shelters, which MWVCAA says they will use to purchase replacement blankets and mats.
No comments:


By now, everyone's probably heard the story of the camp on the walkway of the Center Street bridge, which sources say had been there since August or September 2017, being removed by ODOT on March 19.

Less well publicized is the story of CANDO member Nate Hagan, who took it upon himself to try and improve what he saw was a worsening situation.  In his words,

"I drive by the homeless camp on an almost daily basis. I've watched as it's progressively gotten worse day by day..."

"I was asked by two of the homeless people what I was doing and I told them I drive by often and couldn't let it get any worse. They were actually very nice and thanked me."

"I'll be there again soon to continue the clean up not only because I believe these people deserve better but because we as a city can do better."

"I love Salem and if doing small projects like this on my own time and dime will improve our City I'll be happy to continue."

He later wrote, in response to some comments he was getting, "Seeing so many different people with so many different problems my last concern was taking the tough love pitch in approach. It's time for the homeless of Salem to see we care enough to do something as simple as clean up the city. We all share. Not all the time but we've got start somewhere. And can't let it all fall on the shoulders of ODOT and city of Salem."

ODOT and the Salem Police reported to KGW that social workers visited the camp "more than once to access services." 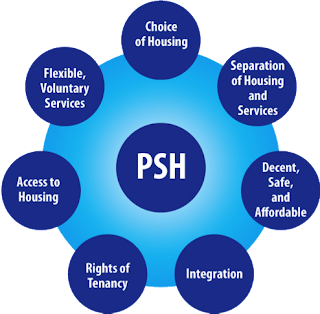 "Most of the people that were on the spiral [walkway] were assessed", according Jimmy Jones, Director of the Mid Willamette Valley Community Action Agency (MWVCAA)'s Community Resources Program, which includes The ARCHES Project.  He indicated those assessments suggest  that almost all will require placement into a permanent supportive housing program in order to be successful.

But for now, PSH beds in the Salem area are very limited.

There is a program for veterans (OHA's VRAP).  Shangri-La runs a small program for a stable clientele that seldom has openings.  Then there's the Salem Housing Authority's Homeless Rental Assistance Program (HRAP), which Jimmy refers to as a "hybrid", because it has some elements of a transitional housing program.

The walkway cleanup resulted in three campers being enrolled in HRAP.  They had previously been referred, but not enrolled, because they couldn't be located.  Police offered all campers "immediate needs" items (such as hats, gloves, jackets, etc.) from the Immediate Needs Station at the Salem Housing Authority.  Sources indicate communication/ coordination between ODOT and providers working on camp cleanups could be improved. 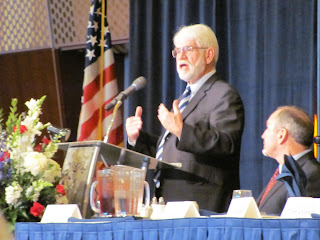 HRAP figured prominently in Mayor Bennett's second State of the City address.  Seventy-seven  homeless individuals have been enrolled in HRAP (meaning they have access to case management services and barrier-removal funds), and 43 have been housed.  In recognition of the program's success (which, in a recent radio interview, the Mayor attributed to the "extraordinarily talented staff at Salem Housing Authority"), SHA was awarded a $50,000 grant for peer support services from Salem Health.  Earlier in the week, the City Council approved the hiring of two additional "housing stability" case managers using funds previously allocated for the HRAP program.  It now seems very likely that the City will continue its support for the program into the foreseeable future.

Also on Wednesday, The Arta-Potties Project donated its inventory of four decorated chemical toilets to Oregon City, where they will be put to their intended use.  For reasons that are not entirely clear, and might not be susceptible to scientific explanation, Oregon City has not run into the same sort of problems that plagued the program in Salem.

That doesn't mean the availability of after-hours public toilet facilities isn't still a problem in Salem.  The need for toilets has figured prominently in the deliberations of the Downtown Homeless Solutions Task Force (see here and here).

In national news that has significant local impact, fears that Congress would approve slashing the HUD budget thankfully did not materialize, and the FY 2018 omnibus bill increasing HUD funding by as much as 10% was signed into law on March 24.  These federal funds are vital to the continuation of HRAP and other Salem Housing Authority programs, as well as the federal projects and programs funded through the City's Urban Development Department and the Oregon Housing and Community Services Department.
No comments: