Chief Moore told City Council recently that, since implementation of the camping ban, exclusions from the Downtown Crime Prevention District were up 65% .

That's 49 exclusions this year in the six weeks between 17 December and 27 January, as opposed to 30 during the same period last year.

Most exclusions, Moore said, were for trespass, drugs, and disorderly conduct.

But, Chief Moore's stats show his officers were not following the law.

According to Moore's crime stats (see here), last year, police issued 199 citations for trespass, drugs and disorderly conduct in CANDO during  December and January.  Adding to that 81 other "enumerated offense" citations issued that year yields a total of 280.  Reduce that total by 25% to compensate for the extra two weeks of stats for a grand total of 210.  Now, because CANDO is larger than the Downtown CPD, we don't know how many of those 210 offenses were committed in the CPD.  But, it stands to reason it was more than 30.  That means police issued considerably fewer exclusion notices than they were required to under the ordinance then in effect.  (We've made a public records request for the exact numbers, but who knows when, if ever, we'll get them.)  We can't get this year's numbers because, per Lt. Upkes, "Crime statistics have not been posted since October [2019] due to a technology change at the Department."

So what, if any, significance should be given the fact that exclusions are "up 65%" since the camping ban went into effect?  Does it mean more "enumerated offenses" are being committed?  Or does it just mean police feel like issuing more exclusion notices?  Because, by the way, there are no standards to guide that decision.  It's completely up to the charging police officer whether to add the additional penalty -- tell someone they can't enter the CPD for 30 days, or must do so only under narrow circumstances (i.e. under the terms of a variance).  And yes, the code provision that gives the officer the discretion whether or not to issue an exclusion notice is unconstitutional on its face.  See State v. Freeland, 667 P.2d 509, 295 Or. 367 (1983). And yes, the City Council, City Manager, City Attorney and Moore were all well aware of this when they approved the code revision.

Did we mention that the fee for appealing an exclusion notice is $270?

Last Monday's staff report on the "Possible Adjustments to the Salem's [sic] Camping Restriction" included this interesting suggestion, "Linking the camping restriction to the Crime Prevention Zones would likely make it more effective within those zones * * *."  But, would it?  Moore told the Council Monday night that compliance had been achieved with no citations issued -- all "voluntary." 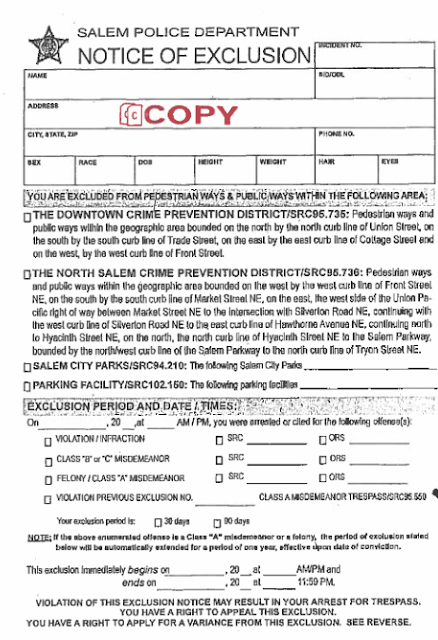 Moreover, if police already are choosing not to exclude for every enumerated offenses committed in the Downtown CPD, how is adding camping to the list going to make the ban more "effective"?  Is this kind of thinking any different from believing that prohibiting sitting and lying on the sidewalks is somehow going to "clean up" downtown?  Because -- even though Moore has told Council that sit-lie would be enforced "selectively" -- there are some in leadership -- Mayor Bennett, Salem Area Chamber, Salem Main Street Association -- who still believe in that unicorn.

Ever heard of a study demonstrating that police intervention is an effective strategy for ending chronic  homelessness?  No?  Because it doesn't.

Here's the fact of the matter.  Salem has for years and years neglected its chronically homeless population, and now the product of that neglect has a very real and very permanent presence downtown during the day for everyone to see, if not experience first hand.  Exclusion notices have not changed the picture.  Banning camping has not changed the picture.  Prohibiting sitting and lying will not change the picture.  New and improved shelters will not change the picture.  The only thing that's going to change the picture is persuading our chronically homeless neighbors to accept some sort of housing intervention.  That requires relationship-building by professionals with skill, training, and experience.  It requires housing options.  And most of all, it requires time and resources the City currently lacks.  Changing the picture downtown is going to take years, people.  Years.  However long you think it will take, it will take longer.

Lazy politicians like to say the problem's intractable, but it's not.  Bringing a functional end to chronic homelessness is not only possible, it's been done.  In addition to ending chronic homelessness, everyone's goal must be to put systems in place such that homelessness is brief, rare, and non-recurring.  People may fall in, but they're not left on their own to find a way out.

And all those who insist on "tough love" as a strategy for ending homelessness -- or at least removing it from view?  Those who want desperately for City Council to "crack down" on the problem, prohibit sitting and lying on sidewalks, and "clean up" downtown?  You are part of the problem.  Your ideas are either unconstitutional or won't have the desired effect, or both, yet you insist they be tried again and again and again, even as you complain about their high cost and ineffectiveness.  Reliance on enforcement strategies are what got us where we are today, and if you don't like where we are today, you have only yourselves to blame.

*Prior to the October revision, SRC 95.770 provided that "Any person arrested or cited to appear in court for charging...based upon probable cause to believe that the person has committed an enumerated offense within a crime prevention district shall be prohibited from being present on pedestrian ways or public ways within the district for any purpose, except as allowed by a variance granted pursuant to SRC 95.780." (Emphasis added.)  According to the staff report, the revision "clarified" that police have discretion when determining whether to issue an exclusion notice for listed offenses.  In fact, it gave police discretion they did not previously possess.

Email ThisBlogThis!Share to TwitterShare to FacebookShare to Pinterest
Labels: stigma