Homeless in a Time of Coronavirus 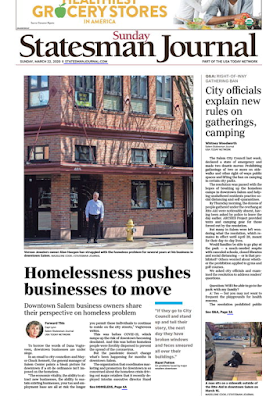 
Right now, we are in a public health crisis. In the past year, we already moved our unsheltered SEVERAL times. Each move brings trauma and mass confusion. We heard the stories. We see the impact. We banned camping in December under the belief that we would have additional shelter beds. That backfired and the unsheltered did the next option possible – find cover under awnings to protect themselves from the elements. Now with the COVID-19 crisis, we pushed our unsheltered BACK OUT into the elements, with tents and sleeping bags provided by ARCHES. Yet, when I asked about accessibility to bathrooms and hand washing stations, the response was there was not going to be accessibility 24/7, and ONLY during park operating hours. I recently learned that the water and restrooms were locked for our unsheltered during open hours. This is unacceptable and a violation of a basic human right. In other words, we force people, a number with accessibility needs, to hold their bowel movement. How many of you have at least 1 restroom in your home? When you have to get up in the middle of the night, do you use the restroom? Now imagine how hard it would be to not be able to use your restroom at all. Could you do it? If not, what would you do?


Our unsheltered communities did not become like this overnight. Many are Salem residents, born and raised. I want to ask my fellow councilors who voted yay at the first reading to reconsider and think about the impact. We push our unsheltered into the woods/parks for now during COVID-19. But once the COVID-19 crisis ends, which I hope is soon, what will happen? Several of you talked about evidence based measures. Where is the evidence based studies that indicate success in passing a sit-lie ban for our unsheltered? When has it become illegal for someone to sit/lie down? Do you stand all day at your job? Do you stand up all day at home? Our unsheltered have NO home. OUTSIDE is their home. A number have jobs, some are in school. Yet, they have no place to live. What are we telling them? What about those with mental health needs? Are we saying that they are less of a person because they do not have a physical roof over their head?


I know that when I leave council chambers tonight, I will have made a decision that I will be proud of. A vote for our marginalized, ignored, and forgotten community. This is why sit-lie must die. I urge my fellow councilors to vote nay.


The day before the vote, Statesman Journal published a "Forward This" column headlined "Homelessness pushes businesses to move" that David Watson described on social media as "nothing but devastating."


Taken at face value this SJ story is one of the most one-sided stories on Salem’s downtown homeless community I have read. One downtown merchant after another, including former merchants who have already left downtown, this SJ story demonizes homeless people, one merchant at-a-time."

Jimmy Jones described it as "disgusting" and Stephen Goins as "sickening."


Fear mongering at its finest – over generalized isolated and extreme stories, void of facts/statistics on actual cases or law enforcement activity, or any inclusion of research on other variables impacting financial health of downtown looking at years to show changes, rent/lease rates, etc.

Also on Monday, Governor Brown issued Executive Order 20-12, ordering all Oregonians to "stay home", even homeless Oregonians.  See Harbarger, M. "Oregon's 'stay at home' order leaves questions for people with no homes."  (23 March 2020, The Oregonian/OregonLive.)  The Governor's order, which remains in effect until further notice, puts pressure on local officials throughout the state not to roust, sweep, clean up or clear homeless encampments like the ones established this week at Wallace Marine and Cascades Gateway parks.  See "COVID-19 Returns Campers to City Parks."

Email ThisBlogThis!Share to TwitterShare to FacebookShare to Pinterest
Labels: News from the Continuum, stigma