The CanDo board recommends to the Council that the Tree Code Citizens’ Advisory Committee (TCCAC) and staff be commended for their work revising SRC 86 and that the proposed revisions be adopted/enacted with the following changes to the procedures on permitting decisions:

Background:  The board voted unanimously to make the foregoing recommendations after oral and written discussion that included the following points(numbered according to each recommendation):

1) The city attorney has advised that, under the proposed revisions to SRC 86 regarding permit decisions:  “as with other applications for permits[,] an applicant would apply for a variance as part of a permit application to trim or remove a tree.”  Although this arrangement makes perfect sense, it is not apparent from the text of the ordinance.  The ordinance should be rearranged or reworded to make this arrangement explicit.

2) The city attorney has advised that Staff and Legal had “much discussion” as to how to structure appeals.  In the view of the city attorney’s office, the “best practice is that there should be single local appeal of decisions.  This reduces the City's cost in processing appeals, which is substantial, and allows the applicant and all parties a timely resolution of the matter.”

As written, proposed SRC has the UTC making the initial permitting decision if a variance is requested, with appeals going to a hearings officer.  However, if no variance is requested, city staff make the initial decision, and sends and appeals to the UTC.  According to the city attorney,
This process is similar to how certain historic design review decisions are made.  For applications where "clear and objective" criteria are involved, the initial decision is made by staff, and may be appealed to the Landmarks Commission.  Where substantial discretion is involved in issuing the decision, the initial decision is referred to the Landmarks Commission, and appeals are to the Hearings Officer, or in the case of demolition or nomination, to the Council.
The proposed arrangement would seem to be needlessly complicated, confusing, and subject to abuse, in that it effectively invites applicants to include a “catch-all” variance request in every permit application as a means of ensuring the right to a contested case hearing (a process that is costly to the City and generally favors the lawyered-up applicant).  The city attorney has suggested the ordinance could be simplified by having city staff make all initial decisions, including variances, and sending appeals to an appeals body, and that would seem to make more sense if the goal is a clear and understandable decision-making process.

3) Proposed SRC 86 allows neighborhood associations and those filing timely comments to appeal decisions that do not involve variances.  The timely commenter wishing to appeal is not required to be a resident of Salem, or to show his or her interests are affected by the permitting decision.  Put another way, proposed SRC 86 would create a right where none presently exists.  That is a policy choice the Council could certainly make, but there is a more conservative choice that the Council should consider.

4) A primary goal in revising SRC 86 was to increase public participation in decisions to trim or remove publicly-owned trees.  There is vocal opposition, the strength of which is not clear, to the creation of an Urban Tree Commission on the grounds that Salem has already too many boards and commissions (which it probably does), even though a UTC would likely replace an existing committee of the Parks and Recreation Advisory Board (the Shade Tree Advisory Committee).  If for this reason, or similar reasons, a majority of the Council seems persuaded against creating a UTC, the primary goal to increase public participation may still be served by sending appeals to an existing board.  The logical choice is the Parks and Recreation Advisory Board, who could, if they chose, create a standing committee for the purpose of hearing appeals.

5) Under proposed SRC 86, the “final say” on permitting decisions (i.e., the authority to hear appeals of permitting decisions) rests with either the UTC (when no variance is requested) or a hearing officer (when a variance is requested).  However, some have expressed concern that city staff or “the City” should have the final say because of the potential for “liability.”  See, e.g., the testimony of Kristin Ramstad, an urban forester who served on the TCCAC (June 8, 2015 Meeting at 49:31).  While the Council has made clear they do not want to hear appeals as a matter of standard procedure, they might be willing to consider, or even favor, a provision that allows them discretion in a matter.  A political “safety valve” could reduce political pressure on the appeals body, and increase accountability for purely political decisions, which are sometimes unavoidable.
No comments:

Email ThisBlogThis!Share to TwitterShare to FacebookShare to Pinterest
Labels: Resolutions


The regular meeting of the CanDo Board of Directors was called to order at 6:03 p.m. on Tuesday, July 21, 2015, at the First Christian Church at 685 Marion Street NE, Salem.
David Dahle was in the chair and Sarah Owens was secretary.


The agenda and the minutes of the June meeting were approved unanimously.


Councilor Bennett reported on upcoming events, the Willamette Humane Society and Marion Polk County Community Cat Program, and the Council’s intention to improve the city’s strategy for dealing with the city’s 20 to 30 dangerous and derelict buildings.


Officer Vanmeter reported a decrease in “car clout” and car theft incidents downtown, reasonably good success with a bike “baiting” strategy, cooperation with county probation and parole authorities in policing Wallace Marine Park (which efforts may result in Park residents moving into downtown), the Salem Police Foundation’s and Downtown Enforcement Team (DET)’s “Drop-in Gladiator” running club for youth at the Marion Street  HOME Youth Resource Center, which they are looking to expand through cooperation with other charitable organizations.


In “interested citizen” comments, Susan Gallagher talked about the upcoming High Street Hustle fitness event on August 15, and asked for volunteers.
The board then heard a presentation by Patricia Farrell on the proposed amendments to Chapter 86 (“Tree Code”).  Note: the text presented to the board was not the same as the one submitted to Council on June 8, 2015, and Ms. Farrell indicated staff had, and would continue to make, changes to the text during the period of “public outreach.”  All those wishing to follow the amendment process should contact Ms. Farrell to ensure they have the latest version of the text to work from.


That the CanDo board recommend to the Council that the Tree Code Citizen’s Advisory Committee (TCCAC) and staff be commended for their work revising SRC 86 and that the proposed revisions be adopted/enacted with the following changes to the procedures on permitting decisions:

**(Emphasis not in original; city staff have already amended proposed SRC 86.055(d) to conform it to SRC 86.080 by allowing neighborhood associations and timely commenters to appeal permitting decisions involving variance requests.)
The meeting of the Board of Directors adjourned at 7:25 p.m.
No comments:


The regular meeting of the CanDo Board of Directors was called to order at 6:00 p.m. on Tuesday, June 16, 2015, at the First Christian Church at 685 Marion Street NE, Salem.
David Dahle was in the chair and Sarah Owens was secretary.


The agenda and the minutes of the May meeting were approved by unanimous consent.


Councilor Bennett reported that the Council had at the meeting on June 8 acted to ban smoking/vaping in City parks, remove exemptions from time limits and metered parking for disabled individuals, and authorized the City Manager to apply for funds from the 2015 Transportation and Growth Management Program to develop a refinement plan for the Winter Street NE-Maple Avenue NE Family-Friendly Bikeway.  The Council also decided that a public hearing on proposed amendments to Chapter 86 (“Tree Code”) should take place before the Council decides certain procedural matters, such as whether an Urban Tree Commission or other entity should hear appeals.


Treasurer Erma Hoffman displayed the new aprons and reflective vests with CanDo’s logo.
The board then heard a presentation by Sheri Wahgren on the North Downtown Housing Investment Strategy.


In new business, Michael Livingston’s amended motion to adopt as Annual Goals for 2015-16: 1) Support initiatives that increase bicyclist and pedestrian safety and access to downtown, 2) Support initiatives offering practical solutions to problems related to indigency downtown, and 3) Increase participation and organizational capacity, passed unanimously.
The meeting of the Board of Directors adjourned at 7:08 p.m.
No comments:


The regular meeting of the CanDo Board of Directors was called to order at 6:00 p.m. on Tuesday, May 19, 2015, at the First Christian Church at 685 Marion Street NE, Salem.
Michael Livingston was in the chair and Sarah Owens was secretary.


The agenda and the minutes of the April meeting were approved by unanimous consent.


Citing a 2009 study on the true costs of homelessness, Officer Vanmeter reported that the Downtown Enforcement team is continuing its efforts to connect homeless residents with social services to the extent possible within the team’s law enforcement responsibilities.  He also invited residents to contact him directly with concerns, rather than go through SPD “dispatch.”  He can be reached at jvanmeter@cityofsalem.net, or 503-932-1474.


Councilor Bennett being absent, the Chair used the time to allow remarks by Brady Rogers about his division, and to report that CanDo had been awarded the matching grant sought from the Salem Parks Foundation that will allow CanDo to install the playground equipment at Pringle Park, and also that he would be meeting with Patricia Farrell, Public Works Department, the following day, about the status of proposed amendments to Chapter 86 of the city code.


The board heard a presentation by Commissioner Janet Carlson and Keizer City Councilor Marlene Quinn on the Keizer Rapids Park project.  The Chair’s motion to issue a letter of support for the project passed unanimously.


The board then heard a presentation by Jeff Leach and Angela Obery about the campaign to encourage the City to implement its plan to develop family-friendly bikeways in the near term.  The Chair’s motions to send a letter supporting the development of a “bike boulevard” to the Mayor and City Council [see below], and to form a committee to work with Salem Bike Boulevard Advocates on their campaign, passed unanimously.  Michael Livingston, Rebekah Engle, and Bob Hanna volunteered and were appointed to the committee.


Thereafter, the Chair opened the floor for the nomination of officers and received two, David Dahle for Chair and Michael Livingston as Vice-Chair, following which both were elected unanimously.
The meeting of the Board of Directors adjourned at 7:18 p.m. 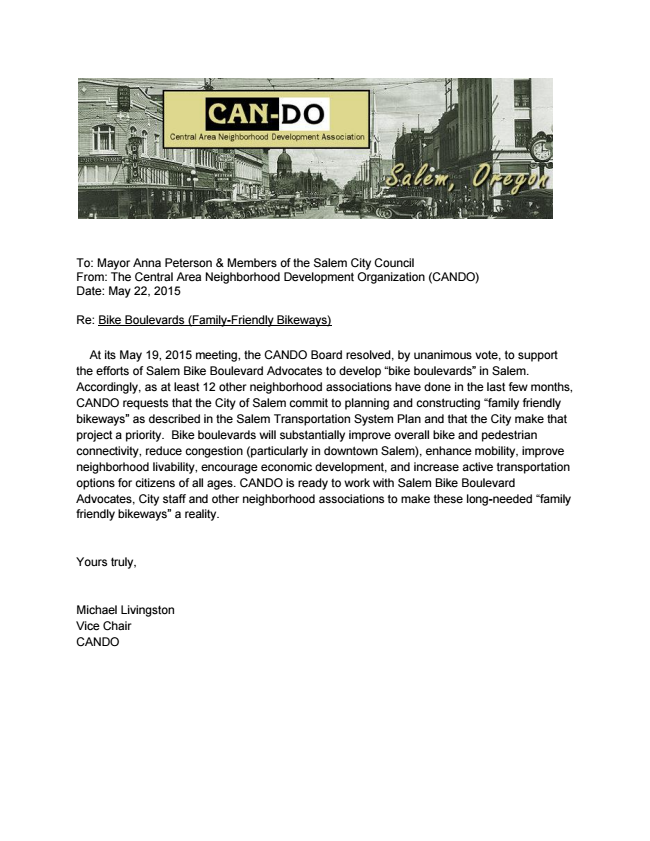