"Things are getting much worse."

"Unintended" and "unexpected", that's how Jimmy Jones, Director of the Mid-Willamette Community Action Agency described the situation downtown in an email to the City Council, three weeks after the City's camping ban went into effect.

In the January 6 email, Jones told Council what CANDO knows too well -- that many who'd been camping downtown before the ban went into effect have moved, sans tents, to downtown sidewalks with overhangs, where they are getting soaked in the rain and high winds, and becoming "physically very sick."  Jones told KGW News up to 90 are living next to Rite Aid.  Without support from the City or ARCHES Project staff, Jones reports that "[t]he situation is deteriorating rapidly."

[T]he waste products (while they were bad near ARCHES) are accumulating at a much greater rate than before because there’s no trash collection nor toilets available. The trash is compound[ed] by the all-day, all-night donations from private citizens that are taking place throughout the downtown...There’s a great deal of garbage, food laying around, and the street front is an open sewer. 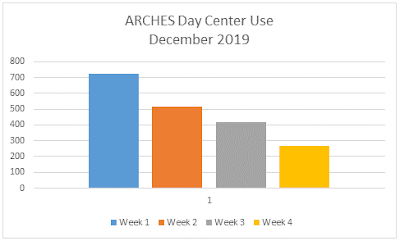 Jones also told the Council that, contrary to what some people (e.g., T. J. Sullivan) predicted, the camping ban did not force people to connect to services.

Rather, The ARCHES Project has seen a marked decline in visits to the day center.

"The fundamental dynamic is that folks are now less well connected to resources after the ban", Jones told the Council.

The City of Keizer enacted a camping ban last night, amidst fear that without it, Salem's campers might take refuge in Keizer.

For the past month, Jones has been working with the City to site a "duration" (open every night) warming shelter.  So far, he's not had success.

The biggest struggle has been some nimbyism, some zoning issues, and the flat out unwillingness of any of these property owners (with perhaps two exceptions) to rent any of these properties for this purpose, without a promise to purchase.  The best building for this work is the old DHS building on 22nd Street, but it is not zoned correctly and it will cost $3.5M.


The City's known since 2017 that its existing prohibitions on camping were either legally flawed or inadequate, and that a comprehensive camping ban was inevitable.  So, we are wondering, what makes what's happened downtown "unintended" or "unexpected"?

Jones recently told KGW News, “When the city of Salem passed their ordinance, they imagined all those people who were camping outside Arches in tents would suddenly go away."  But, last August, Jones told KATU News,

[A]s every homeless service provider in the state will tell you, historically, we and every other provider have had grave concerns about any sit-lie ordinance. And the problem with them generally is that they sort of criminalize people's right to existence and they tend to push the population out of the downtown core, for example, in this case. And so the next question you have to ask yourself is what is the unintended consequences of actions like that? The people won't simply cease to exist when those kinds of legislations are passed. They'll have to go somewhere. So where will they go?

It's abundantly clear from news reports and the social media commentary on them that Salem residents are not buying that any of what's happened was unintended or unexpected.  If there's any  debate it's whether incompetence or indifference are more to blame.  Whichever it is, the issue's  coming back to Council in a week (January 13), and as there doesn't yet appear to be kind of framework for decision-making, it's likely to be a long night of virtue-signaling and speechifying, followed by some arbitrary decision.   This post will be updated with pertinent staff report(s), assuming there are any, after the agenda's published later this week.

1/8/20:  In a story about the City's efforts to identify private property that could be leased as a shelter, the Salem Reporter quoted Kristin Retherford as saying "it’s unlikely there will be anything on the agenda [Monday night, 1/13] involving shelters or designating a place to legally camp."  See
See Brynelson, T. "Officials say NIMBYism, zoning and unwilling landlords sink search for Salem emergency shelter."  (8 January 2020, Salem Reporter.)

Later in the afternoon, the City announced it would close two sidewalks by the Nordstrom and Rite Aid buildings temporarily so that the area could be cleaned up.  See Brynelson, T. "Salem to close, clean, sidewalks where homeless stay."  (8 January 2020, Salem Reporter.) and Bach, J. "Salem to clean up sidewalks overtaken by homeless." (8 January 2020, Statesman Journal.)

1/10/20:  Rite Aid sidewalks were cleaned and a fence was erected to block access to most of the Nordstorm sidewalk.  See Barreda, V. "Downtown business owners get involved in clearing sidewalks."  (10 January 2020, Statesman Journal.)  Total cost of cleanup was approximately $10K.

Email ThisBlogThis!Share to TwitterShare to FacebookShare to Pinterest
Labels: camping, News from the Continuum