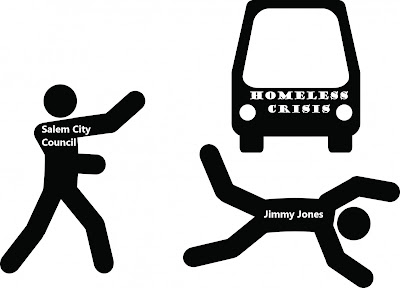 In every crisis, doubt or confusion, take the higher path - the path of compassion, courage, understanding and love.  -- Amit Ray

Lately, Salem's been through a crisis.  No, not that one.  The other one.  The leadership crisis.

It's been said that one of the most pressing challenges political leaders have in the wake of extreme events is how to avoid what is commonly called the blame game.

It's a challenge the Salem City Council failed to meet on Monday night.

The extreme event:  the run up to and implementation of a camping ban.  Why a camping ban?  Contrary to what Mayor Bennett told OPB's Dave Miller, the "idea behind the camping ban" was not that "we had people who'd set up tents in our downtown."

September 2017, staff are unable to persuade City Council to enact a sit-lie ordinance that included a camping ban.

2018, legal staff advise the Mid-Willamette Community Action Agency (MWVCAA) that it has authority to trespass campers; the homeless population living in and around Wallace Marine Park swells into the hundreds.

October 2019, legal staff advise MWVCAA that The ARCHES Project does NOT have authority to trespass campers from the parking strips.

November 2019, campers from Wallace Marine Park establish campsites in the parking strips around The ARCHES Project, as pressure on the City Council to "do something" grows.

Dec 3-8 City staff scramble to put together an information report on organized camping, and turn to MWVCAA's Jimmy Jones and his staff for help.

Dec 9, Jones strongly advises against organized camping but offers a "stopgap" proposal to expand the warming network to a duration model (open every night) in two churches.  Council allocates funds for the expansion and retires for the holidays.

Dec 10, plan falters when the larger of the two churches decides it's not able to participate.

Dec 11-Jan 12, City moves ahead with implementing the camping ban, campers move onto the Capitol Mall and downtown sidewalks, staff work unsuccessfully with Jones and a real estate agent to site a temporary low-barrier shelter, the community is in an uproar and the news media have a field day. 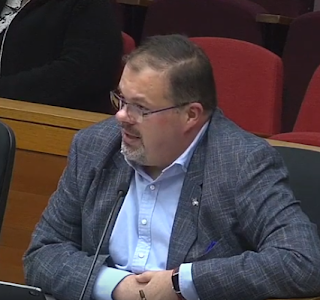 Blame, it should be remembered, is a form of denial.  Denial of responsibility.  Denial of fact.

"I'm feeling very frustrated.  Recently...the suggestion was made by ARCHES staff that we could consider duration warming...it would be quicker, cheaper and most importantly, more humane than our organized camping option...I asked ARCHES staff whether they'd consulted with the churches who have generously hosted the warming centers for the past two years to ensure they were willing and had the capacity to perform this expanded function.  I was quite pleased to hear that they had indeed consulted and were on board with the proposal."

Here's the pertinent part of what was said at the meeting on December 9 (emphasis added):

Hoy: I'm assuming you've spoken with those two establishments [Church at the Park and First Presbyterian Churches] and they're interested and willing to do that.

ARCHES staff: We have.  They have to go through some board approval at their church level, but they wanted to know how serious the inquiry was before they brought it to their board.

Hoy: Just one final question.  You mentioned January 1st.  Is there any way to move that up?

ARCHES staff: That would be contingent on the Board of First Presbyterian and Capital Park.


Granted, this colloquy occurred three hours into the evening meeting, and Hoy didn't have the benefit of our italics, but it should be readily apparent from the exchange, not to mention the circumstances, that there were additional permissions needed, and therefore the possibility that permission would be withheld.

Not according to Hoy, who proceeded to blame Jones's staff for making "a statement that sounds very sure" that was not "actually very sure", implying it was their fault that Hoy moved to fund the duration warming proposal and Council had "left the meeting optimistic and hopeful" and were "sort of left with no good option and...people who didn't have shelter were left with no good option" when things didn't work out with one of the churches.  (Full text of Hoy's statement at the end of this post).

How's that for shifting blame?  Council implements a camping ban in the middle of winter, and it's ARCHES staff's fault there was no place for campers to go, never mind that one of the churches has been open every night, per plan.  Hoy even blamed ARCHES staff for Council's meeting schedule, as if Council couldn't have called a meeting to address the situation, had it wanted to.  (See Rule 4b.)

It's clear from the video of the December 6 meeting that, when speaking to Council, ARCHES staff was focused on explaining how the program would work, i.e. how the budget and staffing levels were adequate and necessary to the task.  In other words, it was the program that staff sounded "very sure" about, not what building would be used.

Council would have known that City and ARCHES staff had had to put these budgets and program proposals together on extremely short notice, and that there were bound to be mistakes.  For instance, staff said Church at the Park and First Presbyterian could accommodate 140, but per Chief Niblock and fire regulations, Church at the Park is limited to 14 and First Presbyterian is limited to 78, for a total of 92.  And, the camping budget estimate double-counted the cost of supports like toilets.  But, if there was a mistake about the churches' agreement to expand warming program, it was Council's, not ARCHES staff's. 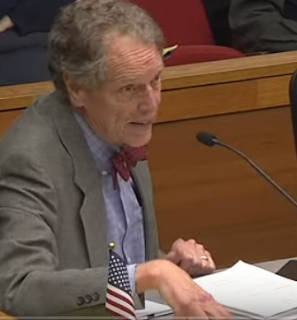 Council, particularly Hoy, has too much experience not to have understood that the duration warming proposal was every bit as subject to contingencies as the organized camping program -- or any program, for that matter, that's been thrown together in a matter of days.  But that didn't stop Bennett and Councilor Andersen from piling on.

Bennett, bless his heart, just said "I think we would all join you in your frustration, Councilor."

But, Andersen -- you know Andersen -- he just had to go one better, and claim that, but for the failure of ARCHES staff, the Council would have passed his motion to develop an organized camping program, and the City "would have had something in place now."  (Full text of Andersen's statement at the end of this post).

Andersen's claim was, of course, counter-factual, self-serving bluster.  There is no way anyone could have stood up an organized camping program in that amount of time, especially over the holidays.

The staff report stated that it would take 60 to 90 days to "prepare a site and provide supervision", and that assumed the City had someone suitable to administer the program -- which it didn't.  Speaking to Council during the meeting, Jimmy Jones could not have been clearer when he told them that he did not think organized camping was a viable alternative and he was unwilling to run such a program on a temporary basis.

Not one of the Council said a word in defense of Jones or his staff.  Not one.  Councilor Nordyke referred to the "frustration we've had" but said she wanted to "look forward."  Councilor Kaser said she'd received a lot of emails and phone calls from people "on both sides of the issue", whatever that means.  Councilor Leung spoke, but said very little.  Councilors Ausec, Lewis and Nanke did not comment.

Councilor Hoy made a premeditated decision to "express publicly my frustration" with a key partner in a time of crisis, why?  What possible purpose did it serve, other than blame-shifting?  He even shared his intent to "express frustration" at the January meeting with at least one other member of Council, who not only did not stop him, but piled on with his own self-serving remarks about how he would have saved the day "but for" Jimmy Jones's staff.

What is wrong with this Council that they don't see how it makes them look to be blaming others for their poor judgment and planning, for their disorganization and policy failures?  McCoid would never have let this happen.

Council owes Jones and The ARCHES Project an unequivocal apology, and they should be very grateful that he is not one to let personal insults interfere with his professionalism.


I'm feeling very frustrated.  Recently...the suggestion was made by ARCHES staff that we could consider duration warming...it would be quicker, cheaper and most importantly, more humane than our organized camping option...I asked ARCHES staff whether they'd consulted with the churches who have generously hosted the warming centers for the past two years to ensure they were willing and had the capacity to perform this expanded function.  I was quite pleased to hear that they had indeed consulted and were on board with the proposal. I made the motion to implement the fund that put the proposal, Council passed the motion, and a meaningful plan was in place and everybody left the meeting optimistic and hopeful.  Sadly, that was all for naught because we learned through what for whatever reason miscommunication misunderstanding I don't know exactly what but the churches weren't they didn't have the capacity to handle new burden and they weren't able to help us in that new way.  So because we had no more meetings planned for the year and had just implemented the camping ban we were sort of left with no good option and most importantly out of all that people who didn't have a shelter were left with no good options.  And I have spent the past month being very frustrated trying to rectify that situation...I just want to express publicly my frustration and I would hope that anytime somebody comes before this Council and makes a statement that sounds very sure that they're actually very sure because we make important decisions based on the information we get.  And we did that and it didn't work.


I was aware the councilor was going to do this and I certainly agree with him because I made the original motion which was to...establish a temporary tent center at Wallace Marine Park with various conditions and when we were informed that the churches were willing to do this...and of course for whatever reason we were informed the churches understandably had not come to the conclusion they were willing to do it, even though we were told so.  I believe that...my motion would have passed and it's a month later now, and we would have had something in place now.  So, in effect, we've lost that month and I certainly concur with Councilor Hoy that we've got to trust what people say.  So, when people come to talk to us, especially in an official capacity, we need to be able to rely on that and we relied on that to our detriment and more importantly, to the detriment of the City and the people in the City who had no place to go.  And that's very disturbing to me.