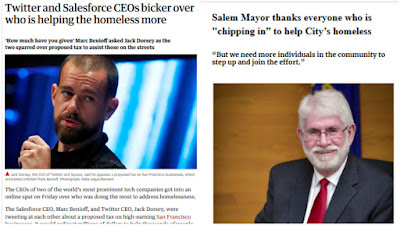 PDX:  Billionaires challenge each other on social media to do more about homelessness.

Yeah, it's not a horse race, but the Mayor burst out of the virtual gate in 2017 with an ambitious plan to address the City's outsized chronic homelessness problem -- the City's first true Housing First program.  And, since then, he seems to have grown a bit shy on the subject of homelessness.  After a couple of recent Willamette Wake Up radio interviews focusing on the situation downtown, he quit his monthly gig there.  Could it be he felt unprepared to deal with such a complex subject?  Or, could it be he didn't like being quoted?  We asked, but he declined to answer.

Maybe the Mayor's retreat had to do with his not wanting to be asked about a recent resident satisfaction survey by the City of Salem.  As we reported earlier, that survey found a majority of residents were unsatisfied with the "City’s coordination of social services to serve needs of homeless in our community."  The City responded to that finding by -- wait for it -- issuing a press release that made a subtle change in the way it described the duties of the regional coordinator hired by the Mid-Willamette Valley Council of Governments.

Original description on the City website: "Following the recommendation of the Mid-Valley Homeless Initiative, the City of Salem contributed $45,000 toward the hiring of a regional coordinator at the Mid-Willamette Valley Council of Governments.  This person is responsible for planning and coordinating programs and projects to prevent and reduce homelessness with our region’s cities, counties, agencies, and services providers."

City's press release description: "Following the recommendation of the Mid-Valley Homeless Initiative, the City of Salem contributed $45,000 toward the hiring of a regional coordinator at the Mid-Willamette Valley Council of Governments.  Under the direction of Mid-Willamette Homeless Initiative leadership, this person researches best practices and coordinates homelessness reduction efforts with the region's city, county and other local governments."


In fairness, both versions overstate what's being done.  Compare the regional coordinator's one-year work plan.  Along the same lines, the press release states, "Salem is taking a collaborative approach and adapting best practices to fit our community."  No explanation, just the bare assertion.  But, if you're gonna brag about collaboratively altering a best practice (e.g., Housing First), you need to explain somehow what it is you changed and why, and prove it's still effective (e.g., the Winnipeg approach).


The press release quotes the Mayor as saying "We have built a strong foundation to address homelessness" and states, "Your individual involvement plays a vital part of reducing homelessness in Salem."  But is either of those statements true?  Less than a month ago, the Mayor was struggling to articulate the City's homelessness policy.  Now, all of a sudden, we have a strong foundation?  And, aren't we way past the point of calling for individual involvement?  We're not saying we shouldn't showcase Abel or Raul or Claire -- we're saying that a homelessness policy that's reliant on individual involvement for its effectiveness is not even a policy, it's just wishful thinking.  As Salem Breakfast on Bikes says about the transportation system, "What we need now is system change, not the individual actions of virtuous-minded individuals." 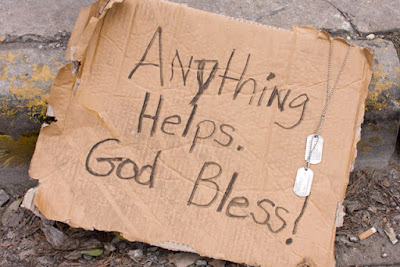 No community can end homelessness as long its leaders substitute policy for hollow phrases like, "Homelessness is all of our responsibility", and "we" just need "chip in", "step up" and "join the effort" because, in essence, "Anything Helps."  The proper response to community dissatisfaction with the City's coordination of social services is immediate, decisive, and sustainable action, like following through with recreating the Salem, Marion and Polk CoC to coordinate the delivery of homeless services, convening the Good Neighbor Partnership that the DHSTF recommended, and calling on religious and business leaders to pledge financial support for HRAP.

The City Council decided last year to embark on a process to revise Salem's Comprehensive Plan, which is supposed to guide how the City grows.  Guess whether the current plan includes a section on homelessness.  The City's "plan" for homelessness is a ten year-old document whose sole purpose is to have something to cite in submissions to HUD.  In other words, there is no comprehensive plan,  policy, set of guidelines or reference points for decision-making on matters affecting homeless services delivery, e.g., shelter siting, other than what is in the zoning code and Strategic Plan, which is pretty minimal.  That's why the City's always reacting to public pressure to "do something" and having to pull together task forces and work groups to try and figure something out, but the result often just confuses and angers people, politicians included, more.

The latest example is the non-public "feasibility meeting" called by Councilor Kaser and Mayor Bennett to consider a possible "organized camping" ordinance.  The meeting resulted in an unofficial, ad hoc decision to look at siting a low-barrier shelter somewhere away from downtown, not because "away from downtown" was, after due deliberation, determined to be the best place for single men and women struggling with substance abuse issues to be sheltered, but because that's where some politician prefers for them to be.  Not only was that a policy decision, it was a bad policy decision, from both a process and a substantive standpoint, and the community, including the homeless community, deserves better.  As Jeff Kositsky says, “You can’t solve homelessness by addressing housed people’s complaints, you solve homelessness by addressing homeless people’s needs.”  Just "anything" doesn't help Salem's homeless residents.