Last night, the "we don't do social services" City Council, sitting as the Urban Renewal Agency (URA), approved increasing a $300K grant to build out the sobering center to $1.1M ("up to").

The center is to be located at 615 Commercial Street NE, which is owned by the Mid Willamette Valley Community Action Agency (MWVCAA).

The URA grant replaces a $330K sobering center construction grant from the Oregon Health Authority, and adds another $470K to cover redesign and construction inflation costs incurred as a result of delay following an unanticipated determination last fall that the land beneath the building had archeological significance.

By returning the OHA grant, the City frees itself from the obligation to operate the sobering center if, as it appears so far to be, "operating a sobering center is financially unattainable." See "Sobering Ctr Operating Gap Widens."  Should the City go through with purchasing the property (as is expected), $380K of the $1.1M will be in the nature of a down payment.  See "Urban Renewal to the Rescue."

The City's refinancing arrangement is, therefore, less about building out the sobering center than it is about making sure MWVCAA's building renovations are completed.  This makes sense.  The  renovations --  sprinklers, showers, laundry facilities and commercial kitchen -- are how the City plans to implement the recommendations of the Downtown Homeless Solutions Task Force (see "DHSTF Recs Update"), and they're a logical prerequisite to the City's acquiring the property, which is needed to free up homeless assistance funds, which is needed to extend hours of operations to evenings and weekends.  See "We Need Many More Resources" and "MWVCAA Pays Mortgage Debt with Hless Assist $$."

Should CANDO be concerned that the sobering center might be "financially unattainable"?  Maybe.  Certainly law enforcement will be concerned.  But, as for the rest of Salem, the case for the sobering center has never been made.  Operations were never RFPed, and there is no operating plan, identifiable ROI or success metrics.  There is also no evidence that sobering services generally lead to treatment.

No homeless services provider we've talked to believes what the City proposes to spend on sobering services is the best use of its limited resources.  Everyone asks, how is this supposed to help the homeless?  Intoxicated individuals are taken downtown for sobering, they wake up after a couple of hours and want to leave -- not discuss treatment options.  So they walk out.  How does this help downtown, exactly?  The City has no answer, only wishful thinking.

What about sunk cost?  MWVCAA Executive Director Jimmy Jones guesses the sobering-only construction cost adds only around $100K to $150K to the total cost of Phase 2.  That might be a lot to some of us, but it's not much compared to the $1M annual operations price tag, of which the City's share is $200K/yr.  In other words, in the event the sobering center does not open, the sunk cost in the sobering center would be more than covered by the first year of non-operation.

So, it makes perfect sense for the City to replace the OHA grant with urban renewal funds and eventually acquire MWVCAA's building.  It relieves the pressure to complete a poorly planned and "financially unattainable" sobering center project, while allowing MWVCAA to complete a costly building rehab.  "The [rehab] design gives us enormous flexibility", Jones told us.  "While we wait on a potential sobering partnership, the space can be used for expanded warming, nighttime bathroom services and many of the other key service recommendations of the Downtown Homeless Solutions Task Force”, he said, following Monday night's URA vote. 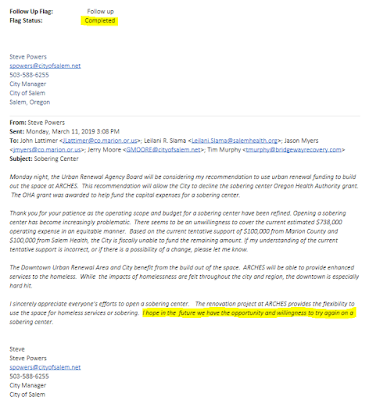 3/18/19 Update:  a March 13 email from City Manager Steve Powers to the agency reps working on the sobering center project advises them about the refinancing arrangements, states, "There seems to be an unwillingness to cover the current estimated $738,000 operating expense in an equitable manner", and ends, “I hope in the future we have the opportunity and willingness to try again on a sobering center.”

It appears, then, that unless and until Marion County or Salem Health express a willingness to contribute more to the annual operating costs, or other funds somehow become available, the City does not intend to pursue the sobering center project further.

The City "should" reconsider "If an equitable allocation of costs can be achieved."  Does that mean that the City is working the problem?  Probably not, even though the project's weirdly still in the Strategic Plan/2019 Council Policy Agenda.

If the dream is well and truly as dead as it seems to be, it'd be foolish to include sobering equipment and facilities in the build out of 615 Commercial Street.  But, that doesn't mean it won't happen.  Jimmy Jones says that until such time as the City is able to obtain the necessary operating cost commitments, the space will be used "as a day center within the day center, for the very highest needs clients that struggle with general day center population."