Consistent with the authority granted by the Salem Housing Authority Commission in January, SHA is currently in negotiations with the State of Oregon/Department of Administrative Services (DAS) to acquire certain property on the North Campus of the State Hospital that happens to include Yaquina Hall, with a big meeting scheduled for March 28.

The building is reportedly sound enough to be a candidate for renovation, but would yield only 37 units, suitable for singles and couples.

Great location and shape (U with a courtyard), within well-established neighborhoods and biking/walking/transit proximity to concentrated employment at government and health facilities, not to mention its proximity to the Mid-Willamette Valley Community Action Agency (MWVCAA).  But. 37 units in a renovated building is probably not optimal from a purely economic standpoint.  All options should be considered for this property.

[3/4/17 Update: property has been acquired and funding is coming together.]

[7/7/17 The Housing Stability Council approved a "grant reservation in an amount up to $4,000,000.00 to Salem Housing Authority" to acquire and rehabilitate Yaquina Hall and SouthFair Apartments.  (The project's size made it necessary to bundle with renovations to SouthFair to make it attractive to private investors.)] 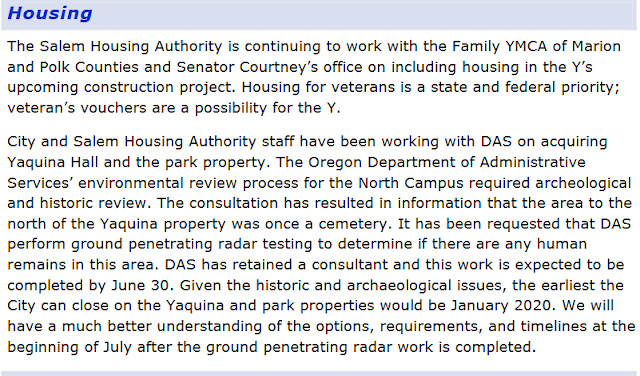 11/27/19 Update:  SHA Administrator Nicole Utz informed the Salem Housing Advisory Committee on Monday that construction has been delayed again for another year at least.  Saying "Don't quote me" on the record at the meeting, Utz shared her understanding of the reason was that the State still had not completed the subdivision plat, and there is no money in the State budget for the necessary infrastructure.  She said the City is in negotiations over costs.