The City Council adopted the proposed 2018-2019 budget this week, with one minor modification, basically overriding  the Budget Committee and adding $50K to the transportation budget for Maple-Winter bikeway speed humps.

The new budget includes continued funding for HRAP and adds funding for the sobering center.  These are two of eight programs the City claims are "actively helping the homeless and working to reduce homelessness in Salem."  The other six are listed at left and on the City's website.

Mayor Peterson, bless her heart, could have offered up a similar list (less HRAP and the sobering center), but her politics got in the way.  She tended to view homelessness much the way she viewed addiction -- as moral failures to which a person should just say "no" and not the province of government except insofar as they threatened public safety.  Consequently, she did not claim credit for programs she might have, which gave the appearance the City "wasn't doing anything."

Mayor Bennett, ever the pragmatist, has no such qualms.  He also knows his constituents are very concerned about  homelessness, and his political legacy will depend in large part on his achievements in this area.  So, under Bennett, the City is both taking credit for its efforts in this area and attempting to do more, with programs like the sobering center and HRAP.

Although it is an extremely challenging program to run, HRAP is doing quite well, according to reports issued regularly by the Salem Housing Authority, who designed and runs the program.

The sobering center program, however, is something of a mystery, despite the budget commitment of $200K/year, beginning 2019.  Considering the sobering center wasn't funded in the 2017-2018 budget precisely because the City wasn't far enough along with the planning, this seems odd.

The last published staff report (issued about a year ago) stated, "As more details regarding specific roles, the site, and funding become available, staff will return to Council for consideration of budget, operational, lease and grant agreements."  Since then, few new details about the sobering center have been released, even to members of the Budget Committee.  Here's what we do know. 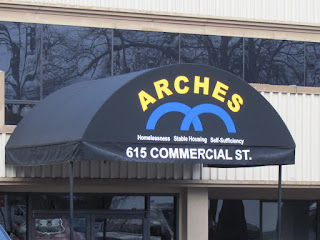 The latest budget says the project will be managed by the City Manager's Office (p. 202) and the Police Department will "lead the City's participation in this collaborative effort" (p. 239).

The Mayor's been heard to say that Bridgeway will operate the program (apparently having been selected without an RFP process), and it will be sited in the Mid Willamette Community Action Agency (MWVCAA)'s new building on Commercial Street (aka the ARCHES building), which is being "built out" for that purpose.  It's also been said that the legislature's committed funding of at least $300K.

The 2018-2019 budget doesn't specify what the $200K will pay for, other than "program costs", meaning operating costs, including rent.


Marion County's budget blurb indicates that the beds will not be for "alcohol-only sobering", as stated in the 2017 information report.


What will the sobering center try to do for drug- and alcohol-affected individuals?  The City says the sobering center will "connect individuals with treatment resources."  Marion County says it will "provide a path for addicted individuals to seek rehab services."  But how will the program do those things?  Will it be referral only?  Or will it be something more like Project Point?  What is being done to ensure treatment services will be readily available, so that there is not, as is currently the case, a long wait?  What measures will determine whether program methods are having the desired effect?  If the program's purpose is simply to "reduce the demand for needed emergency services and hospital beds" (Budget p. 4), do we know what the current demand is?  Or the target reduction?

The City's 2018-2019 budget states that "there is not an offsetting revenue" for the sobering center, so it has to come out of working capital.  Salem Health, on the other hand, is paid to provide emergency services.  They also connect people with addiction problems to treatment.  How do we know it's going to be less costly overall to provide these services through a sobering center?  And how does it make sense for the City to take on its portion of the cost, whatever that is?

The National Sobering Collaborative is an organization formed couple of years ago to study sobering care as a national alternative model to current emergency department or police-based safety holding practices for intoxicated individuals.  It's preliminary survey of sobering facilities "suggests that sobering centers across the country are operating  without uniform or standardized practices, including triage protocols and outcome assessments."

Not one center studied billed insurance or individuals for sobering services, including billing of state-run Medicaid services.  The NSC considered that failure "surprising[,] given the potential healthcare savings these centers provide to Centers for Medicare and Medicaid Services (CMS) or private insurance companies."

At left is a portion of the NSC chart summarizing the survey responses.  Note that the San Francisco Sobering Center, with 11 beds and 4,450 encounters year, costs approximately $1M a year to run, and appears to sober the same folks roughly three times a year, with an average stay lasting between six and ten hours.

Last summer, the City Manager's Office had its hands fairly full with the water crisis.  There might not be enough "bandwidth" at City Hall to deal with that and constructing the new police station and developing the sobering center program in a transparent and inclusive manner.  There's also the question whether it still makes good financial and programmatic sense, assuming it ever did.


There is a real danger that the City's efforts to deal with homelessness are fragmented, rather than comprehensive.  For instance, it is odd that the sobering center has hardly been mentioned during discussions of the Downtown Homeless Solutions Task Force (DHSTF) (fourth on the list at the top), which dissolved in August with a long list of recommendations (see here and here).

About 50 members of the public showed up for the DHSTF's hearing in June, with about 20 commenting.  Most of the comments, to the extent they touched on the proposed solutions, favored 4a (toilets) and 4d (showers and laundry) and opposed 4f (assess code), if that meant revisiting the sit-lie ordinance or something similar.  In the discussion that followed the comment period, no one even mentioned the sobering center or the ARCHES soon-to-open day shelter, or the new mobile shower/laundry program that United Way has been developing, suggesting they either didn't know about them, or didn't understand that those programs will directly impact the same areas they're concerned about.   If that's true, that should be very disturbing.

Piece meal will not get it.  The City simply must take a leadership role in developing a comprehensive approach to these problems.  During the Task Force meeting, Councilor Kaser indicated she felt that was not the City's responsibility.  The trouble is, everyone can say that, and when everyone says that, the responsibility devolves to...law enforcement.  In other words, the City.

The police are, of course, just one part of City government.  But if residents prefer approaches to homelessness that don't involve law enforcement (which is what law enforcement also prefers), then the City simply must develop a shared and comprehensive approach to these problems.  We don't need more lists; we need leadership.  The City doesn't need to do it all, but it does need to convene and communicate.  In other words, to lead.

1/23/19 Update:  It was revealed at the Council Policy Agenda work session on January 23, 2019 that the City's commitment to sobering center operating costs had risen from $200K to $250K.