Based on reports of group fights fueled by intoxication spilling into traffic, frequent domestic violence episodes, and prolonged bouts of incoherent yelling, it's a rough and vulnerable group that's moved on to the parking strips by the ARCHES Project property, across Union Street from the chemical toilets in Marion Square Park.

ARCHES Project staff and partners assessing campers have found that a substantial number are likely to score high on the vulnerability index and will qualify for HRAP.  One individual had lived in the WMP area for 16 years before being rousted by police.

Camps have also been set up along the rail line near the Marion Street Bridge, and on the parking strips in the 700 blocks of Marion and Union Streets.

The camps on parking strips are fueling support for Ordinance Bill 10-19, which would ban camping on City property when it takes effect.  The big question on everyone's mind is, where can these people go?

As always happens, the camps downtown have renewed awareness (or maybe anger is a better word) and a sense of urgency about the problem.  Local businessman Larry Tokarski held a four-hour, VIP homelessness "summit" last week, reportedly to "get everyone on the same page", whatever that might mean.  See Brynelson, T. "Local leaders meet to talk homelessness."  (November 15, 2019, Salem Reporter.) 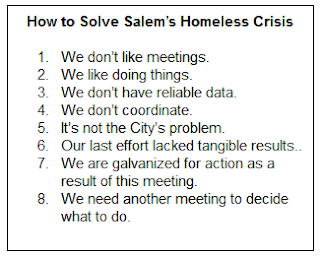 Wherever would we be without business leaders to get us on the same page?

One of the stranger lessons to come out of the Good Neighbor Partnership is that business leaders often prefer to focus on what is sometimes referred to as "managing homelessness" versus finding out what's needed to get people stably housed, even though the former is far and away more resource intensive.

By "managing homelessness" is meant doing what it takes to meet people's basic needs despite their not having a decent and stable place to live.

We're talking emergency overnight shelters, "Safe Sleep" programs, warming centers, sanctioned camping (including car-camping programs), stand-alone feeding and clothing programs, etc.  All such programs come with high opportunity costs and, good intentions notwithstanding, do little to nothing to help a person find stable housing.  You would think business leaders would want to support something more permanent -- something like housing infrastructure -- which is what the professionals keep telling them is what's needed, but the business leaders just don't get it.  They prioritize their own complaints, demand government protection, and only when they finally realize that the authorities are not going to lock up the problem and throw away the key, do they want to talk about alternatives.

Maybe our business leaders are not as smart as they or we think they are?  Or as generous?  Or maybe, just maybe, things are every bit as happy and forward looking as the City's 2019 Community Report would suggest, and everything's as it should be?

But, however bad or good you might think things are now, they could be about to get a lot worse.  The Trump Administration has just ousted USICH Director Matthew Doherty in advance of what's expected to be some sort of massive "sweep" of encampments in Los Angeles and San Francisco, and if that happens, the obvious question once again is where will those people go?

Whatever happens, it's not likely to alter the steady rise of homelessness as Salem residents' biggest concern, or the way it appears to be eroding confidence in City government, as discussed in the City's 2019 Customer Satisfaction Survey.  Maybe the City just needs to keep telling residents homelessness is not the City's problem?

Finally, with all the news there's been about Ordinance Bill 10-19 (aka Sit-Lie, Jr. or the Sidewalk Behavior Ordinance), we've not reported on the August training event organized by United Way of the Mid-Willamette Valley called  "Humanizing Homelessness."  United Way described it as "A training opportunity for local business owners and their staff to acquire better skills for positive outcomes for interactions with homeless people."  The training was sponsored by Chemeketa Center for Business & Industry, The Governor's Cup Coffee Roasters and US Bank.  There was a morning and evening session.  We went to the morning session, which was well attended and well received, though overshadowed by the looming prospect of sit-lie making enforcement the preferred "tool" for downtown businesses facing difficult situations.  United Way currently has no plans for future trainings.