The City's stated reason for resurrecting sit-lie was increased reports of vandalism and "growing concerns and demands" from business that the City "do something."  This post takes a look at the available evidence supporting these claims.


"Over the last several months, concerns and complaints from business owners have increased as have reports of vandalism."  (Emphasis added.)  So wrote Kristin Retherford in a July 12, 2019 email, adding, "In response to these growing concerns and demands that the City take action to address behaviors, on July 22, the City Council will be considering an ordinance relating to activities within the public right of way."

As the chart above illustrates, however, reports of vandalism in the months prior to July were substantially lower than they were in most of 2018.  Looking at the stats just for CANDO, May saw an increase in vandalism (about 20 incidents) over April and June, but not at the rates seen in August, September or October of 2018.

As for the alleged increase in "concerns and complaints from business owners", well, the City kept no records.  Back in 2017, when the City Council was considering the first sit-lie ordinance, CANDO urged the City to keep track of complaints of downtown businesses and to share them with CANDO and/or the Downtown Advisory Board, so that the problems might be analyzed with law enforcement input, and strategies developed to address them.  For whatever reason, the City chose not to honor the request.

The lack of concrete data on the number and type of complaints/problems makes it impossible to "work the problem", which is what downtown businesses say they want the City to do.

A year after the Downtown Homeless Solutions Task Force recommended that the City convene a Downtown Good Neighbor Partnership to facilitate the coordination of homeless services and assist downtown businesses to develop a set of reasonable and mutual behavioral expectations, the City "initiated collaboration meetings between staff, Salem Police Department, service providers, and downtown business and property representatives to provide updates on efforts and improve communication between parties."  That work group was later dubbed the Good Neighbor Partnership.

The first item on the GNP's agenda was Sit-Lie, Jr.  It was not the point from which to start a partnership.  See "City's Community Forum Plan Falters" (August 20, 2019).  If only it could be said that, despite the conflict over Sit-Lie, Jr., the GNP is fulfilling the purpose for which it was formed and making good progress toward service coordination in support of downtown businesses.  However, unfortunately, business and law enforcement have not been cooperating.  Specifically, law enforcement has no-showed all meetings so far, and business has failed repeatedly to provide a list of "scenarios" -- examples of situations they want assistance handling -- which is needed to understand the problem and coordinate an appropriate response.  Might this be because business doesn't need assistance as much as some might think?

A September survey by Salem Main Street Association that some may have hoped would demonstrate widespread support in the business community for Sit-Lie, Jr. failed to make that showing.  See "SMSA Survey" (October 15, 2019).

A City-sponsored gathering "to educate the downtown business and property owners about the role of the Downtown Advisory Board, key projects, and related parking fund challenges" drew 12 people who were asked "to share their vision for the future redevelopment of the UGM/Saffron sites and feedback on downtown challenges and priorities for how parking fund dollars should be used."  If Sit-Lie, Jr. was discussed at that meeting, it didn't make the staff summary.

CANDO recently spent some time visiting over 70 downtown street-level storefronts and restaurants, inviting folks to come to meetings, and sharing copies of the CANDO Good Neighbood Guide, which offers businesses guidance on dealing with people who appear to be having difficulty meeting their basic needs or appear to be exhibiting disruptive symptoms of mental illness.  During these visits, a few expressed frustration with the City's response to specific problems they'd had, but most did not.  This was surprising, given the City's assertion this past July of "growing concerns and demands relating to activities within the public right of way."  Incidentally, the response to the Guide has been consistently positive. 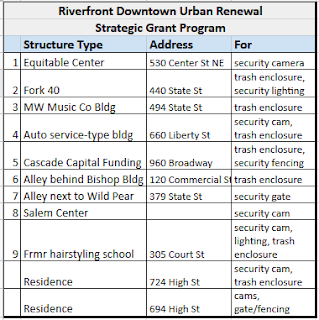 Providing safety and security measures was ranked as a high priority (#3) for the use of the City's parking funds (see above).  A number of downtown businesses have taken advantage of the Riverfront Downtown Urban Renewal Area Strategic Grant Program to "address[] homelessness within the RDURA" by preventing crime through environmental design.  As of the end of September, nine businesses had received grants of about $21,000 each, on average, to purchase security cameras, lighting, fencing and trash enclosures.

Many complaints to the City concern public  urination/defecation, which already is unlawful under City code.  The Downtown Enforcement Team has advised CANDO to urge businesses with such concerns to install security cameras and share the footage with the police, so a detective can be assigned and the offense pursued.  Given the availability of funds to purchase and install the cameras, and the willingness of police prosecute violations, the City can expect more businesses to take advantage of a CPTED (crime prevention through environmental design) approach.

All the above begs the question what business need Sit-Lie, Jr. answers?  Who, besides a hand full of local business people (e.g., Salem Area Chamber of Commerce Director Tom Hoffert has spoken in favor of it [while saying the Chamber has not taken a position], as have T.J. Sullivan of Huggins Insurance, the CPA John Hawkins, and Tyler Jackson of Jackson's Jewelers) even want it?  We just don't know, and, we suspect, neither does the City Council.