In 2017, Chief Moore told the Council that a great deal of thought has gone into the ordinance, including thinking about everything said during public comments.  He said that the ordinance doesn't criminalize  homelessness, that homeless people have addiction and mental health issues and Salem Police officers are maximally empathetic and compassionate and help people access services and get off the streets.  He said business owners deserve equal empathy and to have this "tool" (the ordinance).  He said homeless people are feared, and perception is reality.  He said the basic purpose of the ordinance is to provide education and access to services.  He also said that, if an individual refuses services, s/he can be excluded from a crime prevention district.

Mayor Bennett asked what the police contact will look like.  Moore said that officers will make contacts just as they do now, letting individuals know their behavior is not acceptable "or in many cases illegal", and that they need to move on.  Bennett got the Chief to suggest that there are plenty of places for people to go.

A motion was made by Councilor McCoid, seconded by Councilor Nanke to schedule a public hearing at a future meeting to receive public testimony.  (Councilor Lewis was absent.)

Councilor Nanke said that the ordinance will protect children, and compared it to concealed-carry weaponry, zoning and code compliance laws.

Councilor Andersen noted that existing law prohibits camping in parks and allows exclusion from crime prevention districts for various offenses.  He complimented the City Attorney on the ordinance and said it was still likely to be challenged.  He and Councilor Kaser remarked on the lack of public support for the bill, including from the business sector.

Councilor Andersen offered a substitute motion, seconded by Councilor Hoy, that the Mayor establish a task force of Council, staff, social service agencies, downtown community and the greater Salem community to study the issue of homelessness in the downtown and north Salem crime prevention districts as defined in the proposed statute.

Chief Moore, Mayor Bennett and Councilor Kaser all agreed with Councilor Anderson that "the real problem here is the possessions that people take with them" and that the optimal means for addressing that would be to provide storage facilities (which CANDO recommended the City develop back in 2017).

Councilor Kaser commented that the complaints she receives do not concern sitting and lying down on the sidewalk, but behaviors, some of which are illegal (crimes, offenses).  She also observed that whether someone's collection of personal property is "unsightly" is highly subjective.

Councilor Hoy observed that, if the City Council makes sitting, lying down, camping and "abandoning" property on sidewalks crimes (offenses, infractions), then ultimately, people will be arrested, and then he said all efforts should be focused on addressing the needs of the homeless, which the ordinance does not do.

The original motion to schedule a public hearing at a future meeting to receive public testimony was rejected by a unanimous vote.

Councilor Andersen's motion, seconded by Councilor Kaser, to reject Ordinance Bill No. 22-17 and  establish a Mayor's task force of Council, staff, social service agencies, the downtown community and the greater Salem community to study the issue of homelessness in the downtown and north Salem crime prevention districts and  passed.  Only Nanke voted no.


In 2019, there were three public forums and a work session prior to the first reading of Ordinance Bill 2019.  Councilors McCoid and Cook had been replaced by Leung and Nordyke.  Councilor Lewis was present.

City Manager Steve Powers and Salem Police Chief Jerry Moore made opening remarks.  Both emphasized complaints as the reason for the ordinance.  "The City and community can do better than offering sidewalks as a place to live", Powers read from a prepared statement that included a list of various housing and social services programs that the City supports.  Moore told the Council, "The reason for this ordinance is simple.  It takes two to tango."  He said the people police "contact on a routine basis are not interested in services, they're not interested in changing their lifestyle, they're engaged in behaviors we would not consider acceptable anywhere else."  He said the ordinance would give police "a tool perhaps to encourage them to change their lifestyle."  About enforcement he said, "just because the ordinance exists, doesn't mean it will always be enforced."

Mayor Bennett asked Moore what's changed since the ordinance bill was rejected in 2017.  Moore referred again to continued complaints, and said, "It was the will of a whole bunch of people that this ordinance come back."  Councilor Lewis asked what "the disconnect" was between what Moore was saying about enforcement, and the public perception that enforcement would be "universal."  Moore said he couldn't answer that. 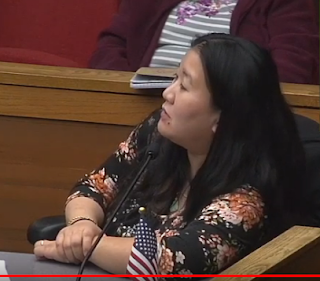 Councilor Leung asked Moore about concerns that had been brought to her about a particular officer who reportedly went out of his way to find people experiencing homelessness and "bully them."  Moore responded that the Department has received very few complaints of police misconduct and Powers advised her to refer complaints to the City's police review board.  Leung observed that people who've been "attacked by this officer are not going to [make formal] report[s]."  She asked why would they think the City would listen to them when there's this officer out there who's targeting them?

After gaining the floor, Councilor Hoy, who is Council President, indicated he would propose a series of revisions for Council's consideration.

He spoke in support of removing the sit-lie provisions, saying that it was difficult to see how it could be enforced "with sufficient compassion."  However, he voted against removal, along with Councilors Nanke, Lewis and Bennett.

Councilor Kaser supported removing the sit-lie provisions for the same reasons she gave in 2017 -- they won't address the complaints of downtown businesses.  Councilor Andersen was concerned the City would be creating a "status crime" and wouldn't be effective.  Councilor Nordyke was also concerned about constitutionality and the prospect of litigation.  She said she believed sit-lie would only push people away from services into residential neighborhoods, "not make them disappear", and she would rather put City resources toward strategies "that actually work."  Councilor Ausec, concurred, noting that the Downtown Homeless Solutions Task Force didn't think sit-lie would be an effective way to address the complaints, nor did he.

The question I have is if [the Chief] comes back a third time because this is not dealing with the problem and we continue to have the kind of behavioral issues that he's talking about, should we look at it again, because I've just got this feeling it's coming back.


Bennett continued, saying he was "amazed" that "there's so much willingness to say 'no'" and that anyone would suggest anyone on the Salem police force might have "some sort of inappropriate relationship with the public they serve", because he himself had never heard such a complaint.  "I don't quite get it, I gotta tell you...maybe it's just I've been around too long...I just don't get it", he said.

Lewis also refused to support removing the sit-lie provisions, saying they addressed the most common complaints that the City's been getting for the last three to five years.  He said the idea that the City would use the ordinance to "sweep out" everyone who's been sitting and lying on the downtown streets was "ridiculous."  "We've been told repeatedly this is a tool to allow the police to deal with behavioral issues, and it's not meant to do anything but that", he said.

Councilor Leung talked a bit about her experience of homelessness due to domestic violence and exhorted the Council when voting to consider the impact of the ordinance on people who were already scared and traumatized.  Her remarks received brief applause from the audience.  Bennett then asked Council, "Do you want to vote?  Or would you like to hear more clapping?"  The Council then voted to remove sit-lie portion of the bill on a five-four vote.

Hoy then proposed to "remove the exclusion zone coupling with the ordinance."  He said the primary reason he had "worked to kill this thing the first time" was his concern about the "streets to jail pipeline."  He said he felt like making violations of the ordinance excludable offenses "facilitates that pipeline, and I don't think we need it."  He said he was also concerned about the uneven application -- greater penalties, depending on where the offense is committed.  "I don't think where you choose to survive" should determine the severity of the penalty, he said.

Absolutely nothing I've heard yet relating to homelessness, and what we're doing, and actually dealing with the homeless issues.  It deals with behavioral issues that require, and have been prompted to bring in police action, and they need a tool...Most of the testimony I've heard this evening was absolutely unrelated to this and dealt with questions of who are they and where did they come from in the homeless community and I'm just not buying that that's what this is about.  This is about people in the homeless community behaving badly, and interfering with the normal activity in our residential-business district downtown and Ward 1.  I think it's disproportionately affected, and we really have an obligation to deal with it.


Bennett, Nanke and Lewis voted to approve the bill as originally drafted.  Council then voted on the revised bill (sans sit-lie and exclusion provisions), which Bennett characterized as "close to, but better than, nothing."  Only Lewis voted against the revised bill.  The ordinance is to take effect after the second reading set for December 2.

In addition to making the revisions directed by Council, the City Attorney revised the ordinance  findings, "clarified" the definition of “public sidewalk” to include the landscape or parking strip, added that violations constitute a “public nuisance” under SRC 50.800, "clarified" that police have discretion when determining whether to issue an exclusion notice for listed offenses, and may issue variances when a notice is issued.  See City Manager Powers' staff report.  (Note: the City Attorney's last two "clarifications" were apparently needed to conform the ordinance to police practice.  However, allowing police discretion whether to impose an additional penalty for a violation inside a Crime Prevention District is, as a matter of law, arbitrary, and therefore a violation of constitutional due process requirements.  The Council should, therefore, not adopt the City Attorney's proposed revision substituting "may for "shall" in Section 95.770.  See Engrossed Bill at page 11.)