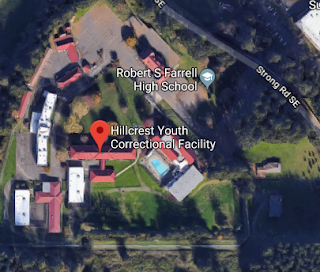 Hillcrest closed in September 2017, after the state determined that an upgrade to meet modern standards was cost-prohibitive.  But, in the last few weeks, Silverton resident Gene Pfeifer and Christian radio talk show host Fay DeMeyer have been pitching the 207,000 SF facility as a "solution as to what to do with Homeless that are not illustrating good manners in public"  (see the "business plan outline" beginning at page 2).

According to their plan, the facility -- which now is owned by the State and located way out south -- would provide not just a "roof and food", but a program for "learning self-discipline on the path to be reintegrated into the workforce."  It also would relocate a certain element of the population away from downtown.  Or, that's the idea, anyway.

The idea of using Hillcrest as shelter first came to the City's attention in an October 3, 2018 meeting called by Councilor Kaser to consider the feasibility of an "organized camping" program.  Later that month, at the October 2018 meeting of the Salem Housing Authority Board of Commissioners, Councilor Lewis asked SHA Administrator Andy Wilch about Hillcrest:

There's been some talk about the Hillcrest property...my interest is that there is a dormitory type building sitting there empty, and we have a homeless crisis.  So, putting those two things together, it makes sense to me -- is it usable, can we do it from a capacity standpoint, and let's assume for a minute that the State of Oregon just lets us use the building, if it's within our ability to use it for homelessness.  Comments?

About three years ago, we went up and looked at the same units that you're talking about, and, at that time, we didn't really see the need...the market has changed a lot, for a lot of our clients.  And so we are having some additional conversations, working with the City and SHA.  I know there was a group that went up there [with] DAS...this afternoon to look at it.  One issue that I think is going to be hard to [overcome] is DAS will probably want to have a single sale.  So, unless they're willing to break up some of the pieces, it could be pretty hard to make that work.  But, if you want to, we could work on that, along with the City.


To which Commissioner Lewis replied:

I don't know if I'm interested in purchasing the property and using that part for homelessness.  I'm more interested in using it while it's still vacant or supposedly up for sale.


Whereupon the City Manager in his capacity as Executive Director of the Housing Authority reassured everyone that a report would be forthcoming.

The January 2019 City Council work session on the Council Policy agenda included a staff report on Hillcrest that indicated that the City would have to acquire the entire 44.6 acre site, asking price $5.6M.  (The Statesman Journal reports the current asking prices is $4.15M.) Of the 17 buildings on the site,

The Administrative Building appears to be the most feasible option for converting to transitional single room occupant housing with shared communal living, kitchen and restroom facilities. It would require restroom and kitchen improvements and may require other, currently unknown improvements to convert the building to residential use.


The project pretty much dropped off the City Council's radar after that.

Pfeifer and DeMeyer apparently were inspired to revive the project by the controversy over the sit-lie ordinance.  Judging by their "business plan" for "Hope Crest", they know very little, if anything, about recovery from chronic homelessness or the current state of homeless services in Salem, and they haven't read the 2019 staff report.  So, we expect to see all sorts of enthusiasm for the project in the coming weeks.

Those who don't believe in zombies and unicorns will want to read the SHA staff report.


January 2019 Report on Feasibility of Hillcrest as Housing

12/1/19 Update:  there's an organizational meeting planned for Thursday, December 5 at 6:30 at First Baptist Church.  Pfeifer wants the City and partners to spend $2.2M to purchase the property. 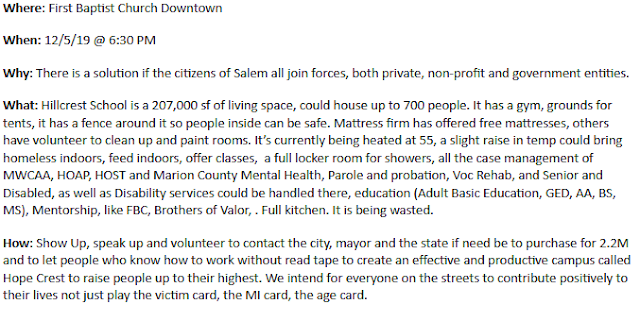 If you go, be sure and ask what organizers plan to do to avoid what happened with Yaquina Hall, and what the science says about the success rate of projects like "Hope Crest" when it comes to getting people stably housed.  Better yet, forego the meeting altogether, and watch this video of Ian De Jong speaking to a group of homeless housing providers instead.

12/7/19  According to a report by the Statesman Journal, about 50 people showed up for the meeting (of 600 invited) and "a broad charitable source" has shown interest in funding operations for the first two years (United Way is not interested).  The two have also pitched to the Salem Area Chamber of Commerce.  SJ quotes DeMeyer as saying she'd "like to see this done in 90 days."  See Bach, J. and Lynn, C. "Duo proposes using former youth corrections campus as haven for Salem's homeless." (December 6, 2019, Statesman Journal.)  Also see the Salem Breakfast on Bikes blog "A Modern Poor Farm?  Concept of Hillcrest to Hope Crest Misses on Transport." ("Altogether this seems like a risky and costly project that is unlikely to help people or to help Salem.") 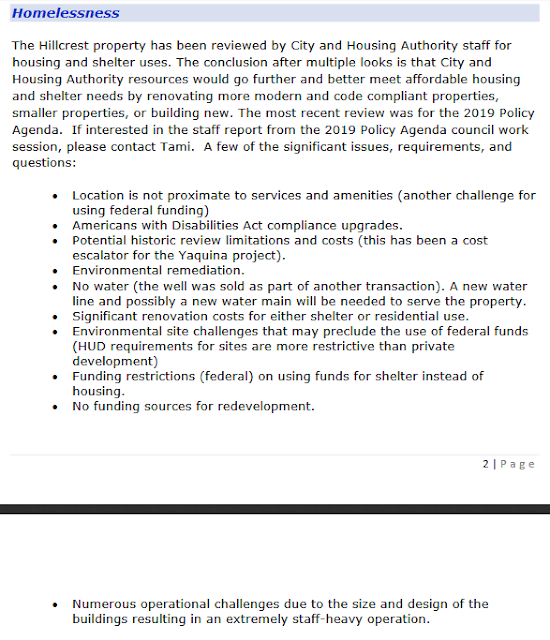