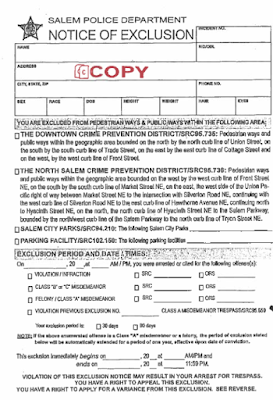 If the City Council enacts Ordinance Bill 10-19 with a sit-lie provision -- with or without the civil exclusion penalty --  the City had better be prepared for a challenge from Disability Rights Oregon, based on what was said during the November 18 work session.

First, DRO is going to cite the Oregon law that prohibits cities from adopting any law that imposes civil penalties of any kind for "behavior that includes as one of its elements...being found in specified places under the influence of alcohol, cannabis or controlled substances."  ORS 430.402.

DRO will then allege something along the lines of:  Salem's "sidewalk behavior ordinance" is preempted by ORS 430.402, targets a protected class (people with disabilities) and is overbroad and unconstitutional on its face because it contains no exceptions for people with substance use or mental health disorders.

And DRO will cite as evidence these remarks by the Salem Police Chief (all emphasis added):

"We don't have the ability to address, uhm, people that are laying on the ground, and uh, scattered with property, perhaps passed out, perhaps drunk, we don't have a drunk-in-public ordinance in the state, and so it deals more with conduct issues that aren't necessarily criminal behavior."

"[P]eople laying on the sidewalk drunk, maybe drug-induced, maybe emotionally disturbed, and the fact that they're allowed to stay there and act the way they do is concerning to many people." 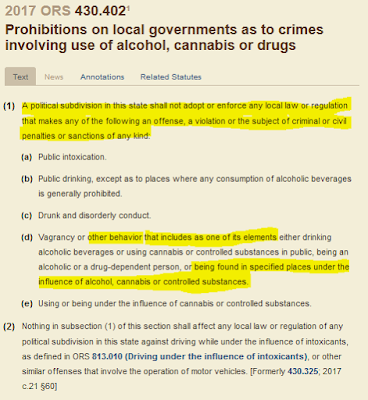 "Now we can contact someone anytime, but they can tell us 'I don't want to talk to you, go away.'   If we had an ordinance we would have a reason to contact someone, and the first thing we would do is to try and get them associated with some social services or some help that might stop that cycle [of arrests]...our officers hooking people up with services that might be of benefit to them, whether it's housing or alcohol or drug treatment."

"[T]he people we deal with downtown have been offered services over and over and over again, and they reject the opportunity to take advantage of them and that's why they are so difficult to deal with."

"[They are] "service resistant" and
don't want to follow rules and regulations.  They don't want to go places where they can't do drugs or drink or whatever, and I think those are the people we routinely deal with, who for three or four years we've gotten complaints about because we have no tools to change their behavior...and people are just tired of it.  Those are the complaints and the calls that we get all the time."

Anyone who thinks to rely on assurances from Salem's legal advisors that Ordinance Bill 10-19 is constitutional should remember, these are the people who can't recognize conflicts of interest, who said parking strips were City parks for purposes of trespassing campers from them, that adjacent property owners had the right to trespass campers from parking strips, that four was a majority of eight, that the City was not required to provide arrest records because a juvenile was involved, and that a City task force that included four City Councilors was not a public body.

Sit-lie is a bad law now, and forever.  It cannot be made right, and the City will lose if it tries to defend it.